It's January 12th - which means it's exactly one year to the day from the day that Patrick's Secrets of the Dragon Tomb was published! 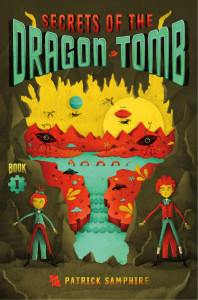 I can't even count how many times I've read this book - and I loved it more and more every time. When I read the first draft, well before it sold or even found an agent, I knew immediately that it would be published. It was so sparky and funny and exciting and heartfelt. It was just wonderful! And I loved every new version more. The final, published version absolutely blew me away...and I wasn't the only one!

Publishers Weekly gave it one of their rare starred reviews, saying

Samphire's swashbuckling tale is both a pitch-perfect pastiche of a Victorian serial and a well-rounded, three-dimensional story of a boy learning that the world is more complicated than he thought. Abundant humor, intricate worldbuilding details, and precisely timed slapstick and mayhem mesh as neatly as the gears and levers of the water abacus, producing a gorgeously articulated clockwork of a novel.

(And you can read the full review here.)

You can see a whole batch of other great reviews from other magazines and blogs here.

I love this book!

And look - it has a brand-new cover lined up for its paperback edition: 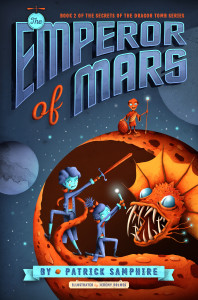 The paperback edition won't come out until July 18th, though, on the same date that Book Two - the wonderful The Emperor or Mars - will be published, carrying Edward and his sisters on even more fabulous adventures. (Sea serpents! Museum heists! And a very, very awesome girl thief!) So if you want to catch up in time to grab Emperor on its publication day, I vote for you to buy Secrets of the Dragon Tomb now, in celebration of its one-year birthday.